NOW AND NOT NOW an exhibition by Glen O’Malley

My friend’s definition of Far North Queensland was, “It starts at the rain trees on the south side of Ingham.” I wasn’t born there. But a half century ago – exactly fifty years ago – I first moved to FNQ, Ingham in fact. I lived there for two years. I fell in love with Far North Queensland. In FNQ I could understand the dreams of Paul Gauguin and Michael Fomenko.

In 1969 my picture making was painting and drawing, and my subjects, then, were mythical figures in dreamlike environments. Just up the road from Ingham’s Tyto Gallery, in a back room of the assembly hall at Ingham High School I developed my first roll of film. I didn’t know then that I would spend much of my life making photos, but I made that decision soon after.

Only a few years later I had my first photography exhibition. Then I could perhaps be described as a ‘street photographer’. From there my work became more clearly documentary – but always figures and environments. I often found the relationship between the ‘real’ figures and the ‘real’ environments stranger than I could imagine, and recorded those moments when I could.

Then I moved back to Far North Queensland where I’ve lived in the one house for thirty years. At that time my photos took a turn toward the more obviously surreal. Now much of my work contains more mythical figures in dreamlike environments. The pictures in NOW AND NOT NOW, at Tyto, have been made in the last twenty-five years but I see in them a little of my paintings of fifty years ago. 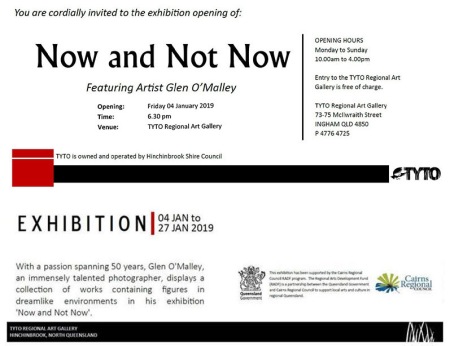