THIS STORY HAS BEEN RE-POSTED FROM<WOTWEDID.WORDPRESS.COM>

The concept of cultural tourism is often cited as the justification for local council support of regional arts infrastructure that may include, cultural policy, gallery facility and staffing, education or interpretive or developmental officers, local arts workers, regional grant administration and auspicing. What interests us as we travel around the country is the quality of regional arts practice and the entrepreneurial activities that are taking place that tend to be lost in the white noise of the big city hype of blockbusters and art heroes.

The Grafton Regional Gallery is well known for its Jacaranda trees and the Jacaranda Acquisitive Drawing Prize. But there are other things, for example how many regional galleries participate in highway billboard advertising? —GRG does. Another aspect is the diversity of shows presented include curated exhibitions from works in their collection, shows by local artists and travelling exhibitions—recently the Archibald Prize,.

On this occasion two exhibitions attracted our interest, The Art of Sound, a GRG collaboration with the National Film and Sound Archive and Garlugun.gi by local ceramicist Bevan Skinner.

Skinner’s work is informed by his indigenous heritage. A Gumbaygan man he states in the detailed catalogue accompanying the show that: ‘my work always revolves around my culture, my identity and my spirit.’ While any artist could claim the same provenance for their art Skinner’s work is a deliberate and profound blending of the earth of his country (clays, oxides and pigments), and culture (mark making, tradition and storytelling). While the dot technique of the desert artists is apparent in this work Skinner’s use of the motif is to represent stars in the sky and the meaningfulness that they have for him as a way to connect and remember loved ones passed away and now appearing as stars in the night sky. These works are part of a larger series Winda-bin Waluurrgundi – Stars of The Valley.

Bevan Skinner’s work is presented in a multi-plinthed exhibition space with groups of pots and plates resonating. Some time ago I remember a comment by David Hockney in which he said something around the idea that the time the artist takes in making a work is matched by how it will engage with the viewer. There is something of this in Skinner’s work, for me each piece is a vessel that holds in the artist’s communiqué and the viewer’s gaze activates the message.

One side issue emerging from Bevan Skinner’s biography is Associate Diploma in Ceramics training he completed at TAFE in the early 1990s with art teachers who assisted with his development as an artist. I can only exhibit trepidation about the future of artists like Skinner who early in their career ‘found themselves’ through TAFE, now that in NSW art training has been dropped from all TAFE colleges. 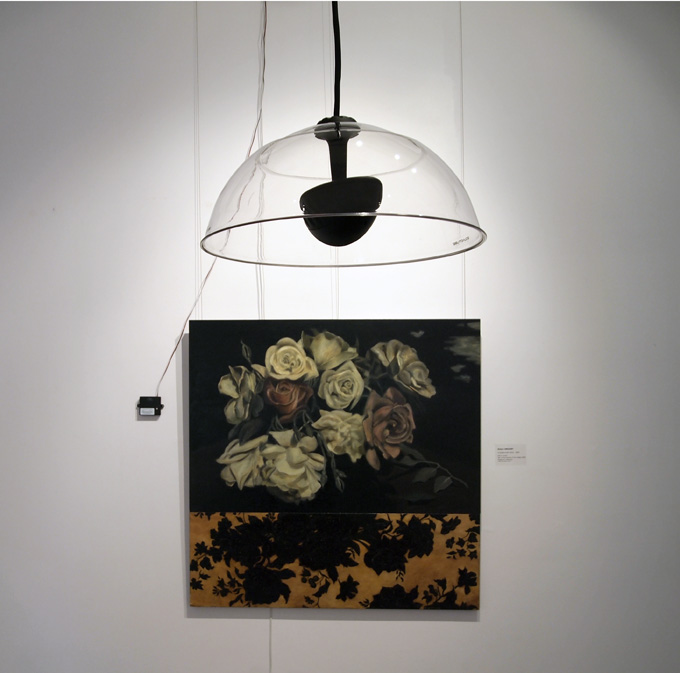 The Art of Sound offers a new way of presenting visual art in a gallery space. The concept is to pair works from the GAG collection with audio material supplied from the National Film and Sound Archive so that the viewer of an artwork has a sight and sound experience of the art. On entering the gallery space the visitor is immediately met with the usual artworks on the wall but something is different—each has some kind of parabolic Perspex dish suspended above or headphones nearby. These sonic devices deliver, in a fairly localised way, music or audio to compliment the work. Composer and sound/artist designer James Hurley undertook the installation of the audio apparatus at GAG.

The Art of Sound installation

Gallery Director Jude McBean does not provide answers in her didactic panel statement but rather asks some provocative questions:

‘I wonder how long the effect of linking a particular sound with an artwork will last and how much will the sound determine or change perceptions of the work. These questions also apply to the linking of an artwork to a sound. How long will the participant recall the artwork when hearing that sound outside of the gallery and will the artwork determine or change the experience of the sound or not? The answers are eagerly anticipated over the duration of the project and in later years.’

What I found was that sometimes the audio triggered personal recollections of time and place and that these could be used as a kind of reference for the visual experience of the art. Music, for example, has a broad dissemination across a generation. Take for example the ‘Happy Little Vegemites’ 1954 advertisement. However the artist’s work is very limited in its distribution so the audio conjures up a familiar personal response through which the image is viewed for its concurrency. On other occasions like with Mike Riley’s Stock Reserve near Grafton (2010) and indigenous folk music by AMATA (2007) where the piece of music or audio was unknown as was the artwork a new experience was created. A profound work for me was the Judy Cassab, Mothers Love (2004), J W Lindt pair of 1870s photographs of local Aboriginal people with children synergised by the traditional Indigenous singing by BUMA (2008) a song about crying babies who will go to sleep when fed. Could it be that mine was the predictable response that the curators and their pairing of visual and audio stimulus wished to create?

Another, perhaps subversive experiment that I undertook in the space was to attempt to activate as many sound sources as possible and listen to the montage of sounds whilst moving about the artworks—somehow it created an experience of life itself …

Thank you to the GAG and to other regional galleries around the country who through ingenuity, creativity, entrepreneurship and cunning do as much for their communities as they do for the rest of the country in presenting contemporary art.

Photos by Doug and Victoria Cooper